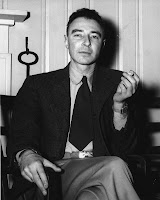 In the Pulitzer Price winning book, American Prometheus, by Kai Bird and Martin J Sherwin, the authors describe the amazing life of J Robert Oppenheimer. What I found amazing was Oppi's leadership during the project. I'd like to share the three lessons I learned from the book.

First, Oppenheimer adapted to his environment. Oppi had never led anything more than his lectures before he became the leader of the project to develop the atom bomb in 1942. The project slowly grew to staff 130,000 people. In the beginning everyone knew that Oppi was very unprepared. He showed this by creating a very elementary org structure in the beginning. But after only a few months he had adapted to be a skilled administrator. Everyone, even those who didn't like him were amazed at his change. Being adaptable is a key part of leadership. No team or situation will ever be the same as the last one you lead. You have to listen and observe your new situation and adapt. 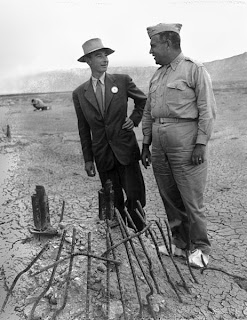 Second, Oppenheimer was a consensus builder. Often arguments would breakout between scientists and Oppi would listen very carefully to both sides. Then he rephrased each person's argument and when he was done there would be no conflict, just harmony. He did this over and over. He saw both view points and showed how the two sides had much common ground. In this way he built consensus. There was very little time and everyone worked long hours, so each time he cut through the noise and brought the consensus forward, he brought them another step closer to victory. Even if you are not leading a team in such a critical project, you should still build consensus and seek common ground.

Third, Oppi's presence brought clarity to a room. He didn't even need to say anything, but just his being in the room with the team helped them. He brought energy and urgency to the meetings that made everyone be their best. They wanted to be as brilliant as he believed them to be. They were reminded of their mission and focused when he was there. Any leader needs to imbibe her team with that type of focus and energy to make a project successful.

These are the three main leadership lessons I learned from reading about Oppenheimer. I felt very inspired by his leadership and I think everyone can employ these tips in their own situations to be successful.
Posted by StartupCTO at 7:46 PM