Cabin in the Woods movie review

In this review, Joe Wiewiora and Bett Correa give their views of Cabin in the Woods.

Bett: I make a point of not watching "horror movies," which by definition mean that
everyone you care about in the film dies in the end, but I made an exception because
this movie was produced by one of my favorite directors, Joss Wedon. Joss' other work
that I like include Firefly/Serenity, Dr Horrible's Sing-Along Blog and Dollhouse.
So I decided to see a horror movie against my normal rules because I knew it would be
special. Special is a good word to describe Cabin in the Woods.

Joe: When it comes to horror movies I’ve seen my fair share, in spite of myself. I don’t particularly care for the genre, but I have seen the classics and a fair number of the newer ones that my friends have recommended.


I wasn’t planning on seeing Cabin in the Woods, especially not in theaters, but there was nothing else going on that Tuesday night and my friends wanted to go. Knowing that Joss Wedon directed the movie helped sell it. I’m a fan of his work on Buffy, Dr. Horrible, and especially Firefly/Serenity. Wedon is a solid director and Cabin has the initial feel of a classic horror flick.

Bett: The first half of the movie is a parody of your standard horror movie. Each character introduced in the first 5 minutes of the movie feels like one we've seen countless times, but with a slight twist. The jock and the dumb blonde are grad students. The "square girl" is getting over her crush on her professor. The stoner and the second jock seam perfectly cliché and don't give us any reason to doubt that they are not what they appear to be.

Joe: Joss Wedon is known for his strong female lead actresses. Sarah Michelle Gellar portrayed Buffy and later went on to star in “I Know What You Did Last Summer” and “The Grudge.” Eliza Dushku worked with Wedon on Dollhouse and has starred in “Soul Survivor” and “Wrong Turn.” Therefore, the poor casting Kristen Connolly in “Cabin in the Woods” came as a disappointment.

Connolly plays the lead. Her acting is lackluster and unconvincing. Her portrayal of the “square girl” did not inspire me to root for her as the “final girl.” Give me a Laurie Strode (from Halloween) or a Sidney Prescott (from Scream) any day.

On the plus side, Fran Kranz who plays the pothead friend is perfect in his role. He worked with Joss Wedon in the TV series Dollhouse. His character provides excellent comic relief and has some of the best lines in the movie. I still remember the exchange with the gruff backwoods gas station owner:

The Civil War reference is priceless. Unfortunately none of the other leads are given such witty lines. Without this sort of emotional connection, the audience hardly feels a loss when the characters meet their fate. However, each of the five characters are integral to the central story and the plot twist later on in the movie.

Bett: But the characters having a twist is not the only unusual thing that appears in the first 10 minutes of the movie. The second unusual thing is the two nerdy old men who work in some sort of mission control center. They are focused on beating and also being very sure they will.

These two unusual things change the normal formula of the cliché horror movie giving us reason to stay interested and later in the movie we are rewarded for our patience.

Joe: The two older men in the mission control center made the movie interesting. I kept waiting for the scenes to cut back to them and why it was important to beat . As the movie progressed I became more focused on the secondary story line. I kept thinking that Joss Wedon had the material for a riveting TV show or series of sequels/prequel films.

Bett: The acting of the five main cliché characters seems completely as expected for the first half. There’s not much meat for the actors to sink their teeth into. The second part on the other hand has a lot of variety and excitement. I think we see some nice range, but not academy award material.

Joe: I’m going to blame most of the poor acting on poor writing. Chris Hemsworth worked with Wedon on both “Cabin” and “The Avengers.” His portrayal of Thor was fantastic. His portrayal of the jock in “Cabin” was cookie-cutter. The only difference was the script.

I agree with Bett, the actors didn’t have anything to sink their teeth into. The best-written lines are for comic relief. Seasoned actors may have overcome poor writing, but 4 of the 5 lead cast members have little-to-no experience outside of television.

Bett: Special effects play a big role in this film. They are well executed and really create a whole world for the characters to live in. I specially like the motorcycle flying scene and the elevators scene.

Joe: The elevator scene is excellent. It is well shot and shows Wedon’s knowledge of horror films. There are also some very suspenseful scenes at the beginning. The game of “Truth or Dare” with the stuffed wolf’s head and the scene in the basement come to mind.

The creature makeup in the film is phenomenal. They make things believable and are true to the genre. By contrast, I found some of the computer special effects to be of poor quality. There were a few moments, towards the end, where I felt I was watching CG from the SyFy channel.

Bett: I think Cabin in the Woods is worth watching because of its unique twist and intriguing story line. It’s really two movies. A small parody plugged into a larger story. I expected something good from Joss and he delivered. I give it a 7 out of 10. Thumbs up.

Joe: I really enjoyed the secondary storyline. Also the plot twist helped set this film apart. Unfortunately, this film suffers from too many little problems that really add up in the end. Cabin is worth watching, but wait to rent it on DVD. If you want watch an amazing Joss Wedon film in theaters, watch The Avengers. I give Cabin in the Woods a 6 out of 10. Thumbs down. 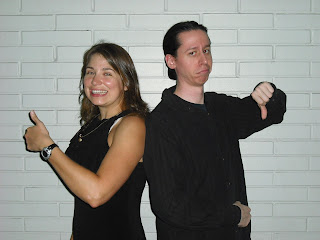 Posted by StartupCTO at 3:52 PM