In this review, Joe Wiewiora and Bett Correa give their views of Iron Man 3.

Joe: I really wanted to see Iron Man 3 right when it came out, but I had a busy weekend at work. As a result, I had to close my ears whenever anybody started talking about the movie. Most the snippets I heard were good, though. I finally got to see the movie on Monday night and I was not disappointed. Iron Man 3 is definitely a movie to see in theaters and looks incredible on the big screen.

Bett: I loved the first two movies and was excited to see the 3rd. I wanted to see a few things specifically. First I wanted to see Tony would be changed after the Avengers, and second to see how his relationship with Pepper Potts was developing. I first loved Tony Stark for his attitude of self-reliance, fortitude, passion, and hard work. I wanted to see if he would still remain true to that persona.

Joe: Tony Stark continues to create the greatest and best iron man armor for himself. His latest armor can be remote controlled or fly, piece by piece, through the air to reassemble itself around himself or others. This new plot device makes for some great scenes. It also shows that Tony Stark can still kick some butt with only an iron glove and a boot. In addition, the new armor has some glitches. The thrusters don’t work. It doesn’t always fly. It isn’t battle ready. It’s refreshing to see a suit that is fallible and, like Tony Stark, isn’t perfect.

A large part of the plot in Iron Man 3 was derived from the acclaimed Extremis storyline in the comic books. In the movie scientists and Aldrich Killian, played by Guy Pearce, develop a way of repairing a damaged body and even restoring limbs. However, subjects can burn molten-hot at times and cut through metal…even iron. This process is weaponized, and the Mandarin recruits former soldiers for his army. Along with some fiery special effects, this gives the audience some villains that can actually pose a threat to Iron Man and aren’t just another bad guy in an armored suit. There are some excellent and well-choreographed fight sequences in the film’s finale.

Bett: The story starts out in the past with Tony meeting two people who will be very significant for the story, a woman creating a biological agent who allows plants to self-repair called Extremis and a young scientist who wants to meet Tony. Tony treats the young scientist played by Guy Pearce badly and Tony will live to regret it. There’s fun plot twists along the way, lots of action, a slightly touching relationship between Tony and a small town kid. Tony starts off trying to figure out how he fits into the world now that he knows about the other Avengers. He makes snide comments to the military when they ask him for help asking them to go get the other Avengers. I felt this was a little silly, but I guess the director/screenwriters had to address it.

Joe: Tony Stark is fond of saying, “I am Iron Man.” And I can’t see anyone besides Robert Downey Jr. playing the role. He is singularly suited for the character and his quips and banter with the other characters make for an entertaining movie watching experience.

I like watching the evolving relationship between Tony Stark and Pepper Potts. Robert Downey Jr. and Gwyneth Paltrow have great on screen chemistry, which makes the audience want to root for the couple no matter what misadventures or missiles are hurtled their way.

Fans of Don Cheadle will be happy to see a greater presence of him as Colonel James Rhodes. Whether he’s hanging out with best friend Tony Stark or taking down the bad guys, he kicks butt both in and out of his own armor as War Machine/Iron Patriot.

I was happy to see Jon Favreau return as bodyguard Happy Hogan. There’s some especially funny moments in a pre-millennium New Years Eve party flashback. Guy Pearce adds his talents to the cast as the initially sympathetic and later malevolent Aldrich Killian. But I had the greatest initial trepidation of seeing Ben Kingsley, veteran actor though he is, in the role of the villain the Mandarin. Fortunately there was no need to worry. Writer/Director Shane Black did a brilliant job with the character and I love his interpretation. It also answers the question asked in the movie of how an international terrorist could exist in a world full of heroes.

Bett: Tony Stark seems to adlib many lines and seems almost to be mumbling occasionally. I don’t really mind this, but sometimes it’s too hard to follow. Pepper Potts and him seem like a happy couple, even though he is still a work-a-holic. Tony’s computer, Edwin Jarvis, has its own personality which actually is one of the most fun characters in the movie. The banter between Tony and his Jarvis keeps the action from getting too heavy. Guy Peace is excellent as the young scientist, Aldrich Killian, then later as the villain. Ben Kingsley who plays Mandarin feels confusing because we aren’t really sure what kind of person he is supposed to be, but all that is explained very well in one of the movies best plot twists.

Joe: The special effects and camera work in Iron Man 3 are outstanding. Scenes like the final fight or freefalling airplane passengers rescue can only truly be appreciated on the big screen.


A riveting scene shot incredibly high over the beautiful backdrop of Miami Beach. Iron Man must try and save as many passengers as he can that have been sucked out of an airplane during mid-flight. Some directors might shoot this scene as more of a continuous shot from the hero’s perspective, like Bryan Singer in Superman Returns. However, director Shane Black distinguishes himself by using a series of jump cuts between our hero and the terrified freefalling passengers. This technique draws the audience in even further and makes an already gripping scene, a riveting one.

This is only one example of the type of directing that distinguishes Shane Black from others who have been behind the camera shooting Iron Man. Personally, I really enjoyed this style of cinema for Iron Man 3.

Bett: I watched the non-3d version of the movie. As would be expected, Iron Man 3 has a lot of amazing special effects, but what I liked was some original action scenes. One of the central plot points is a substance, Extremis, which helps self-repair a human system. This leads to many scenes of humans regenerating. The last fight scene is pretty spectacular especially the very last part! No spoilers! I’ll just say it’s very exciting.

Joe: Iron Man 3 can be seen and enjoyed by everybody. I saw the movie with my Dad, who is also a big comic book fan. But you don’t have to like comics books to see Iron Man 3. You don’t really have to have seen Iron Man or Iron Man 2. The movie can stand on its own. You can even see it with your girlfriend or on a date, because Iron Man/Tony Stark is one of the few heroes with a real, good, and well-developed romantic relationship. This is a great movie all around, 8 out of 10. I give Iron Man 3 a thumbs up.

Bett: Iron Man 3 delivers action, plot twists, excellent acting from all, and great special effects. Tony Stark’s attitude still comes through and is an inspiration! I give it 9 out of 10. 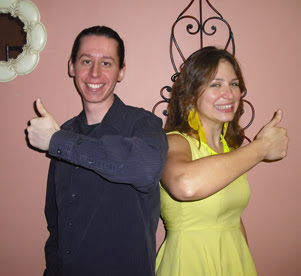